On February the third, 1933, an inaugural meeting was held in Glasgow to established a new dog club in Scotland, namely being THE COCKER SPANIEL CLUB of SCOTLAND (1933) and the newly formed club was always known as this until the date “(1933)” was dropped some 14 years later. The first President of the new Club was Mr A B Nicolson of Glenbervie, near Aberdeen and it is understandable why he never actually attended a committee meeting in the whole year, as it must be appreciated that travelling any distance in those days was not easy. From the early Minute Books, with their beautifully hand-written pages, emerges the first band of club organisers – 3 gentlemen officers, plus a committee of 9 … 7 men and 2 ladies, which included a Mrs Mackenzie – an aunt of one of the club’s current committee members.

By 1938 two more ladies had joined the ranks! The club’s first show was a 12 class event held at 3.00 pm on June 24th, 1933, in the Glasgow City Hall, admission was 6d (2.1/2 pence) and catalogues were 3d. It is recorded that the Misses Carson, appearing at the Empire Theatre were invited to open the show and these ladies kindly obliged.

The choice of Judge for the show was Mr C A Phillips – a one time President of the Cocker Spaniel Club in England.It is not known if the show was a great success, but it was recorded that it cost £6 to run. Litters of puppies were  accepted at the Show, not for competition, at 5/- (shillings) per entry and no commission was required if a sale resulted.

During 1934 the famous “Silver Spoons” (which are now collector’s items), were given as special prizes at the Club’s own shows and also to other Clubs who had Cocker classes, provided that a Cocker Specialist judged these.  In 1938, 36 of these spoons were dispersed to various Clubs, including our own, making quite a hole in the budget of those days. In July 1940 a Charity Show was held in aid of the Red Cross and The War Relief Fund, this was the last show to be held until December 9th, 1944, when Clubs total funds stood at £37.1.3d.

Our first Challenge Certificates were granted in 1946 and, because no suitable hall could be found in Glasgow for this Championship Show, the Drill Hall, Forrest Road, Edinburgh was chosen. On that occasion Mr Warner Hill and Mr Brian Chambers judged.
The following year Championship status was given to the East of Scotland Cocker Spaniel Club (In 1937 a similar but quite separate Cocker Spaniel Club was established in the East of Scotland, to serve that area.This Club still flourishes today) and this reverted to the Cocker Club in Glasgow in 1948 and has been successful there ever since. For several reasons proxy voting was discontinued in 1947 and never re-established.

Sadly the 1951 Members’ Show was cancelled due to lack of entries and in that same year the membership totalled 92. A similar occasion occurred in the 60’s but since then the breed has flourished. The social life of the Membership has not been neglected and the first event held to raise funds, combined with an enjoyable evening, was a whist drive – so popular in the 30’s and now out of fashion. At the Members’Autumn Show in 1953, a mock auction and raffle was held for a black cocker bitch puppy, a dozen eggs, 100 cigarettes and a sultana cake! The resultant sum was £30.2/-. Since then we have survived barn dances, rallies, matches, trimming demonstrations, cheese & wine parties and pantomime visits!  Scotland still retains the pantomime in its original form, so far.

This brings us to 1981 and the Scottish Kennel Club Knock-Out Competition … an all breeds inter-club series of events, which lasted for many months and required staying power. Happily the cocker people and their charges were the eventual winners. 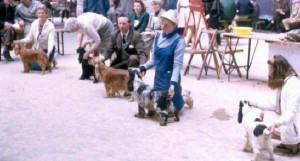 Although an idea for a Club Magazine had been mooted many years before it was not until 1980 that our first Year Book appeared, the front cover of which was designed by our artist friend, Brian Foster. As you will see his artwork is carried as part of this site and remains as our present day Year Book covers. The Year Book also details the work carried out by our 3 ladies who run the Cocker Spaniel Rescue Service, which forms a vital part in the Club’s activities. The Year Book is free to all current Members at home and overseas and in the year 2000 we produced the first Year Book in full colour.

Non-members are welcome to purchase a Year Book (details are listed separately within this site). The Club is a founder member of the Cocker Spaniel Breed Council and for many years was represented on the Council for Docked Breeds paper writers. The aim of the Club is to help Members and their dogs and in return hope they will feel able to contribute their time and talents to the Club.

Many people have done so in the past and it would be impossible to name them all in a short history, but to them the Club owes it’s thanks and is grateful that such a lovely breed as the Cocker Spaniel has been promoted and safeguarded by the Club over the last 73 years.